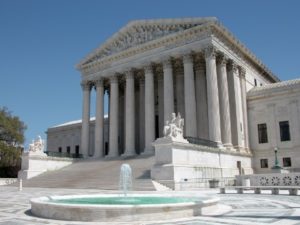 Amid a lofty discussion of what the Constitution says about “sovereignty,” a divided Supreme Court ruled on Thursday that Puerto Rico does not have independent authority to prosecute someone for the same crime that has been charged in federal court.  The argument appears to diminish the constitutional stature that the Puerto Rican government thought it has had for nearly seven decades.

The Court’s six-to-two ruling in Puerto Rico v. Sanchez Valle also raised questions about what the commonwealth can do to reduce its massive public debt.  The Court, of course, is explicitly pondering that authority in a separate case (Puerto Rico v. Franklin California Tax-Free Trust), and a decision in that case is expected soon, but the outcome there might be influenced by Thursday’s ruling.

Even so, the Court may not have the last word on the debt crisis, because Congress is actively considering right now whether to create a new option for settling the island’s debts.  The mere fact that the issue is now being weighed on Capitol Hill shows that Congress clearly understands that what Puerto Rico can do depends almost completely upon what the lawmakers are willing to allow.

Justice Elena Kagan’s opinion for the majority today — in a case about multiple prosecutions for the same crime — went to considerable lengths to try to draw basic distinctions between two types of sovereignty in the U.S. government system.  However, the ruling ultimately turned on the basic fact that Puerto Rico has been a territory — with less constitutional rank than a state — since 1898.  As such, it continues to be entirely subordinate to Congress under the Constitution’s Territories Clause.

The new ruling added to that impression by relying, in part, upon a series of early twentieth-century rulings, known as “the Insular Cases,” that treated the inhabitants of United States territories as distinctly lacking in self-governing capacity.

The majority opinion endeavored to show that the Court was not taking away the self-governing authority that Congress gave Puerto Rico in 1950, when it designated the island as a “commonwealth” and allowed it to write (mostly on its own) a constitution.  While the opinion appeared to celebrate that as a positive and unique development for Puerto Rico, the result was that the commonwealth cannot enforce its own criminal laws when the crimes are the same as those prosecuted under federal criminal law.

Multiple prosecutions for the same crime are generally banned by the Constitution’s Double Jeopardy Clause, found in the Fifth Amendment.  But the Court since at least 1922 has held to the view that the same criminal conduct can be constitutionally punished by two “sovereign” governments.  The federal government and state governments qualify as separate sovereigns, but Thursday’s ruling declared that a territory and the commonwealth of Puerto Rico do not have that status because the source of their criminal enforcement authority is ultimately traced to Congress.

Two Justices who joined in the ruling — Ruth Bader Ginsburg, who wrote a separate opinion that Clarence Thomas joined — argued that the Court should reconsider this permission for multiple prosecutions for the same crime.  One, they argued, might be thought sufficient while multiple trials might be thought an affront to “human dignity.”  The issue should be examined “in a future case.”  (It would take the vote of four Justices to take on that issue, if it is raised in a future case.)

The decision blocked Puerto Rico from going ahead with the prosecution of two individuals on charges of violating the commonwealth’s gun-possession laws.  Those two individuals thus have now successfully barred a second prosecution, after they had pleaded guilty to similar federal charges for the same conduct.

Justice Stephen G. Breyer, joined by Justice Sonia Sotomayor, dissented, arguing that Congress had set Puerto Rico free to govern itself with the creation of the island as a commonwealth in 1950.  Among an array of other arguments in favor of their contention, the dissenters noted that the United States government has explicitly told the United Nations that Puerto Rico is no longer a territory without self-governing authority, and they noted that the Justice Department — until this case — had held the view that Puerto Rico had independent authority to prosecute its own criminal laws.