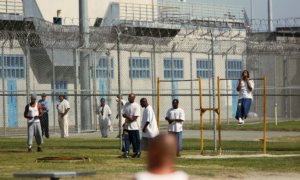 One person equals one vote: seems simple enough. Unfortunately, that hasn’t worked out for many Americans throughout history, specifically women and people of color. There is a long tradition of denying women, people with low incomes and people of color their vote in America, most recently in the form of a poll tax that, in an increasing number of states, requires a state-issued photo ID in order to vote. The situation can seem insurmountable.

But there is something President Obama can do, right now, that could make huge strides towards fixing one aspect of longstanding disenfranchisement. We could end the practice of prison gerrymandering, or including prisoners in the US census where they are imprisoned rather than where they lived before incarceration.

This practice transfers the voting power of millions of mostly urban black and brown people to overwhelmingly white and rural districts, an all-out plunder of the political power of black and brown communities. They are counted in the population in the districts where their prisons are even though convicted felons are banned from voting.

But prison gerrymandering allows us to normalize a process which denies representation – and humanity – to millions of people. People in prison have children, parents, siblings, friends and communities who need them, who need services in their absence, and who deserve to be counted.

This is why the Women Donors Network has signed on to a letter with the Funders’ Committee on Civic Participation and other prominent foundations, asking the US Census Bureau to change this unjust policy.

It’s also why WDN has for years supported the leadership of formerly incarcerated people, and has helped to fund the first national conference of Formerly Incarcerated and Convicted People and Families Movement, to be held in September. This conference seeks to shape the narrative of not only the president’s last days in office but of the next administration in regard to prison policies. We are at a turning point in the struggle to stop prison gerrymandering.

President Obama has made clear that equality and equal representation are values important to his administration. Addressing prison gerrymandering falls in line with those values. Obama has the power to solve this issue – he can strike down an unconstitutional practice of how prisoners are counted, while standing up for the premise of one person, one vote.